‘Freedom On The Mat’ is an Irish-produced radio documentary (2015) exploring how women are using Yoga in Palestine as a means of accessing personal and collective relief from the every-day stresses and injustice of life under illegal Israeli Military occupation.

Produced by Muireann de Barra with translation by Lubna Takruri

Freedom On The Mat is a new Irish-produced Radio Documentary which tells the story of a unique and inspiring group of Palestinian women as they become Yoga instructors and bring the benefits of yoga to their local communities, villages and refugee camps throughout the West Bank. The documentary shares the stories of three trainees from different parts of the West Bank – Jalela, a community worker; Mirna, a clinical health worker and Ibtisam, a psycho-social counsellor as they undergo training and begin to introduce yoga to their communities in creative and unprecedented ways. Freedom On the Mat explores the possibility that Yoga could present Palestinian women with a means of finding symbolic inner freedom from the everyday struggle of life under military occupation. By resisting social and political injustice individually and collectively through yoga, they find a rare sense of space to shelter from the ongoing trauma of living under military occupation.

The documentary was recorded on location in the West Bank by independent  Irish documentary maker, Muireann de Barra.  It was broadcast on Newstalk 106-108fm on 28th March and Sunday 29th March 2015

Muireann de Barra is an independent documentary maker, Further Education (Media Production) teacher and a qualified yoga instructor based in Limerick,  Ireland. Freedom On The Mat draws on all three facets of her life and experience as it seeks to observe, learn from and share stories of those denied justice and equality in a society burdened with more than four decades of illegal military occupation. 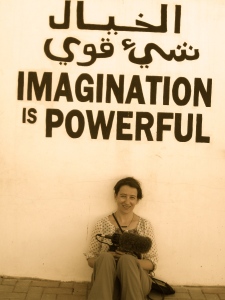 Freedom On The Mat

Freedom On The Mat